The new interface continues to be the focus of our attention, and today we are happy to allow a project structure to be configured. Administrators and project managers can now configure the assignments, groups, types, priorities, and statuses of their projects, all within the new interface.

How can I modify the project configuration?

The easiest way is to use the treeview. Under each project, use the menu to access the Project Configuration menu and click one of the sub-menu to access the corresponding popup panel (assignments, statuses, groups, types, priorities).

Also, when opening any given task, simply click the edit icon next to the field you want to modify.

How do I configure my project assignments?

Once you click the edit icon from the edit task panel, this panel will display and will allow you to assign or unassign one or several users to your project.

We are happy to announce that the time management module is now available in the new interface. You can start entering your personal time with the timesheet module or the punch clock. Moreover, you can approve/reject other users’ time with the time approval module.

By using the Time button on the top header.

What options are available with the time entry panel?

Search and Treeview Enhancements in the New Interface

A number of changes were added recently and outlined below, including a new Project view in the Navigation panel!

The Search edit panel is the main area to custom select the projects and information that you want as your primary task results set. From there you can further filter.

Parameters have been added to further select just the data you are seeking.

1) Parameters for using/excluding Static template projects. In most use cases, exclusion of tasks that are within Static templates is desired (and is selected by default)
2) The Document parameter will allow targeting only tasks that include document attachments

Treeview for All Projects, with an information tag

From the Projects section of the Navigation panel you can now select the ALL PROJECTS item from the drop-down menu:

This allows the ability to view whether the Project is completed as well as visually display the Parent/Child project relationships for Template-based projects as well as provide template information (Static tag).

When 2 or more users have the Editing panel open for the same task, and 1 of the user saves the task with changes made, the other user(s) are informed of a task update if they attempt to modify. If any modifications have been entered but not saved, the user will have an opportunity to copy their content (otherwise they could lose it). If no modifications were made, the Edit panel refreshes upon a mouse focus over the panel, and the change by the other user is reflected.

This is a major improvement upon previous versions wherein the vast majority of occasions the user was informed that the task was modified, and they lost any information that they had entered.

If you have not yet noticed, under your My Profile area by clicking on your avatar on the top right, you can choose between 2 theme offerings. The default “Light” theme, and a much more contrasted (and many have commented, cooler) “Dark” theme are available.

You may have noticed a “lightening” up of the interface for the “Light” theme, and much better use of contrast in the “Dark” theme. Previously, too many grey tones led to many users not being able to easily discern different zones of the application. 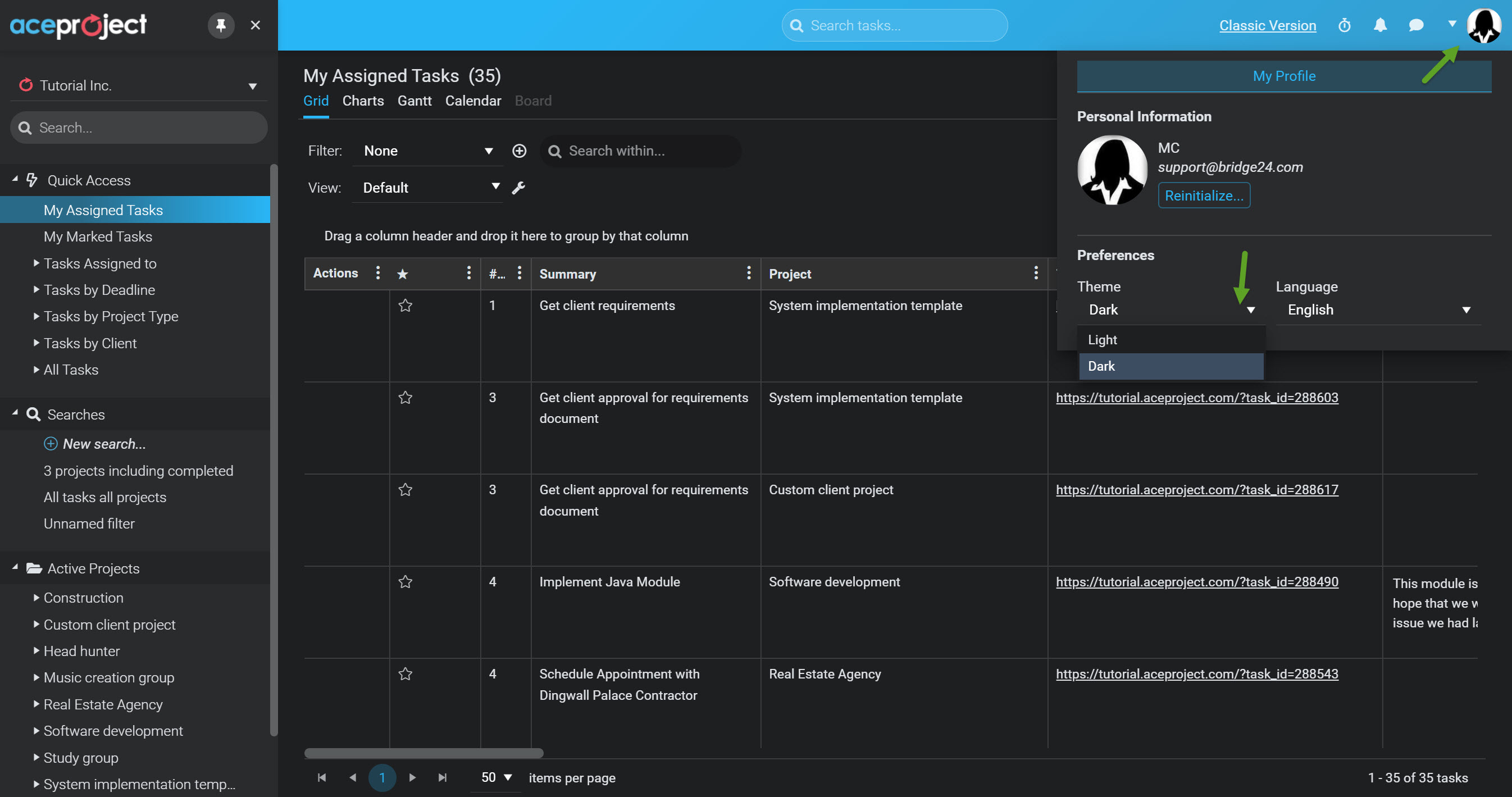 Not only is access to a “Dark” theme cool, but there may also be health benefits depending on the lighting conditions and time of day that you work. If you suffer from eye fatigue, try switching themes and see if it makes a difference.

More features will be ported to the New interface as time goes on.

Don’t you wish that you could fix the mistake in your comment on the task after you just saved it? Well, no more copying the comment, deleting the comment, then pasting and correcting the new comment. Simply click the edit icon and modify the comment. Any user can now delete their own comments as well. Don’t worry Project Managers and Administrators, all changes are recorded under the Task History.

More features will be ported to the New interface as time goes on.

Introducing Time for Start and End Dates in the New Interface

Through the new interface, you can now set the Time on the Edit Task Panel for Start and End dates. Scheduling tasks has always been to the day. Sub-day refinement, to the hour and minute, has been a desired request by many of our users. This is used across all views, including the Gantt and Calendar views. Multiple tasks can now be set throughout the day for meetings, or to divide activities between morning and afternoons, for example.

When you edit a task and view the Start and End Date fields a new time icon appears beside each of them. Clicking on the icon will allow the input fields to become accessible. Set the time as needed.

Manage your day in the Calendar view

Day and Agenda modes in the Calendar view are now more useful with the ability to define the start and end hours and minutes of a task. In addition, you can dynamically edit by dragging and […]

Today you may have noticed a new icon on the top navigation bar of a small stopwatch? We have begun porting time management features into the new interface. Over the next several weeks/months, the majority of time entering, approval, and reporting features will become available. Be advised that for now, saved Time Clock entries can only be accessed through the Classic Interface.

The Time Clock can be conveniently accessed by clicking on the icon.

From the pop-up, you can select the Project and Task to associate the time to.

The new interface’s Edit panel now has some nice enhancements. Users will notice that a number of fields have become editable. As well, the order of and display of fields is now configurable as well as the ability to add Custom hours between assigned users.

A number of new fields were made available to edit from the Edit Panel. These include; Actual start date, Actual end date, Estimated expenses, and Estimated time. All editable fields in the Classic interface are now available within the New interface!

This week the new Gantt chart view has been enhanced including dependency creation, a third tab in the Edit task panel, and better time representation and scaling. Eventually, the Gantt chart will be available exclusively within the New Interface.

A number of other enhancements have also been implemented, such as improved detected changes, and an improved concept for global email notifications, being more accessible with an ability to temporarily disable the feature.

Dependency information is available by clicking on the dependency line connecting the tasks.

Dependency information can also be accessed and managed through the Edit Task panel through an additional tab providing easy navigation between predecessors and successors. All tasks, with or without dates, and independent of status (completed or not) can be used as successors and predecessors greatly improving usage.

When a user edits a task, and attempts to open another task before saving, changes were once lost. A new way of detecting changes has been implemented, allowing the user to not lose entered […]